01 Turning Into the Insect Robots
02 How Do They Operate?
03 Their Targets
04 What They Can Do?
05 Concluding Remarks

We all are very much aware that science is covering everything under its massive umbrella. The consequential patterns of technology evolution are expanding with ever-increasing speed wrapping everything around the globe.

Estimations state that there are approx. 200 million insects in this world. We have seen mechanics and electronics dropping out the manual work. We have seen robots citizens wish to start their families soon. There is another window just opened to enter insect robots in the arena of technology and artificial intelligence.

You are used to seeing many animals, birds, and insect robots playing as the vivid spy in action movies but are you people ready to enter them in your real life?

Well, the million-dollar question is that either we will be able to distinguish the real and a robotic insect?

With the advancement of technology, the game of going beyond your rivals actually seems like a victory. Similarly, researchers and scientists try hard enough to break their previous records and bring something new.

Everything we have seen until now depicts the evolution of some mind-boggling robots in the coming future. Scientists have taken a tough time to learn from insects and utilize their patterns in creating new ones.

Turning Into the Insect Robots

Scientists have been trying to create bug robots for more than a decade and finally, they have produced complex robots to mimic insect robots. Rather than creating a tinier creature, researchers have taken over control over bugs by turning them into robots.

Called Cyborg, these insect robots are being used in varied uses, be it; spying, search, and research missions. Chinese are using robotic pigeons to have eyes on their people which seems scary but secure.

There is many to see still!

It is completely interesting to know the fact that what new technology comes from nature and new species come from science.

The imitation of the natural systems, models, and elements in order to solve a complex hub of human problems is called Biomimicry. It plays a very important role in the production and operation of insect robots.

It ensures that the mimic insects designed in the way to proficiently benefit the human experience and devising any error if seen. 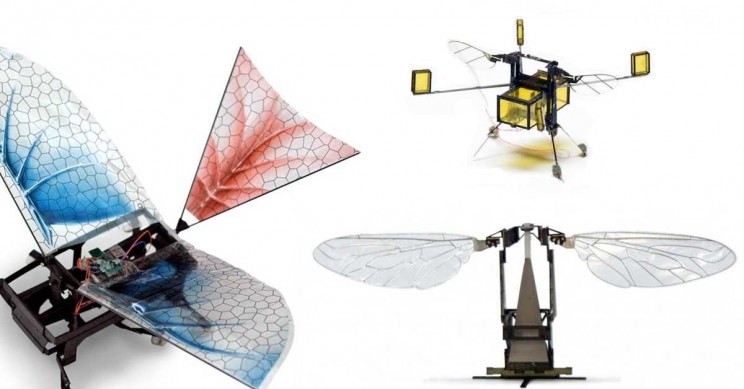 How Do They Operate?

The robotic insects manufacture through the technology of biomimicry that inserts an image processing system to take pictures with its eye; which is basically a low-resolution camera inspired by the ways bees process images.

These cameras can capture snapshots on a continuous frame and forward the information to the insect’s brain.

Scientists and researchers are constantly evolving a study where they are planning to dispatch a swarm of insect robots in case of emergency to convey information. It is also predicted that these robots could be used to pollinate crops and gardens.

At this time, robots can dive underwater by flapping their wings. Technology is now in a rush to continuously expand their production to a wide-scale and make these insects common throughout the states.

What They Can Do?

An imitator can never be the same as the real thing. There are little drawbacks in the bundle of advantages that have given some hideous question marks over its drippy creation. Yet, there are endless advantages people are anticipating and many of them have already avail:

Insect-inspired robots are coming to distinct the real creators out of the planet which is scary. They can take on jobs, both big and small, which are too tedious for humans to carry out. To this day and age, we are sandwiched between two problems; robot citizens and insect robots.

But robots are purely operated to ease our life and we need to be an optimist about the good future. Till the better time comes, go and watch the Ant-Man movie to get some thrills.