We have seen many flying cars, autonomous machines, self-operated houses, and an entirely digital world all the time in science fiction movies that depict our future. All this is based on one thing which is the Internet of Things (IoT) which gives rise to smart technology. From horse-drawn carriages to self-driving cars, everything has changed quite a lot with the fusion of smart technology into development.

The future cities we see in movies mainly depend on what the policies and regulations will be established today by the urban leaders, planners, businesses, stakeholder, and of course, resident. Smart cities are based on IoT that recognize the potential challenges and adopt well-designed planning and strategy to address them. These challenges are present today which we don’t take into consideration.

IoT is already beginning to reshape the cities of tomorrow by addressing the challenges and imposing technical variations to eliminate them. Smart technology is saying to give us substantially improved cities that will be rich with digital gadgets everywhere. Some people are saying the disruptive development brought by technology will be full of distress and contamination while others predict a sustained structure for the metropolis cities.

There are smart technology and IoT areas that are approaching the development of a better future. Here is a look at some areas.

In smart cities, the digital vision will give rise to a better quality of services, reduced congestion, improved safety, and new levels of efficient development. Smart streetlights are one example that will be outfitted with this technology. Through this, brightness can be reduced when it detects no vehicle or people present.

This will monitor nearby parking that will enable drivers to find available parking at any location in the city. Smart crosswalk signals will monitor pedestrian and vehicle traffic flows that will optimize traffic flows and reduce accidents. Speaking in terms of public safety, the computerized digital vision will enable streetlights that could send alerts on dangerous or blocked storm drains.

The city environment captures data at regular levels in real-time with the help of sensors, cameras, digital kiosks, and nodes. Along with that, radio frequency identification (RFID) and Bluetooth devices relay information on a continuous basis which is translated into data.

Hence, people share their information in one way or another which is stored in a device that is used to know their behaviour. Moving, congregation, consumption, and many other activities show their pattern of living and ultimately this data become the breathing part of the city.

This data can adjust itself which is based on the non-stop data analysis.

Songdo International Business District, in South Korea, informally known as a “City in the box” is a live example of what is possible with the statistical analysis. This city has been built as a smart city or ubiquitous city on 600 hectares of reclaimed land.

Every inch of the district is drenched with fibre optical cables, movements and consumptions are monitored via data, and the smart citizens even that small children generate big data. Traffic patterns also changed with the help of RFID technology which is tagged to all its cars.

Children wear bracelets with sensors that inform their parents about their current location. The city is best for everyone from people to pets. Citizens can be monitored for health issues, errant children treated long before any panic sets in, less energy is consumed, and traffic movement is better. 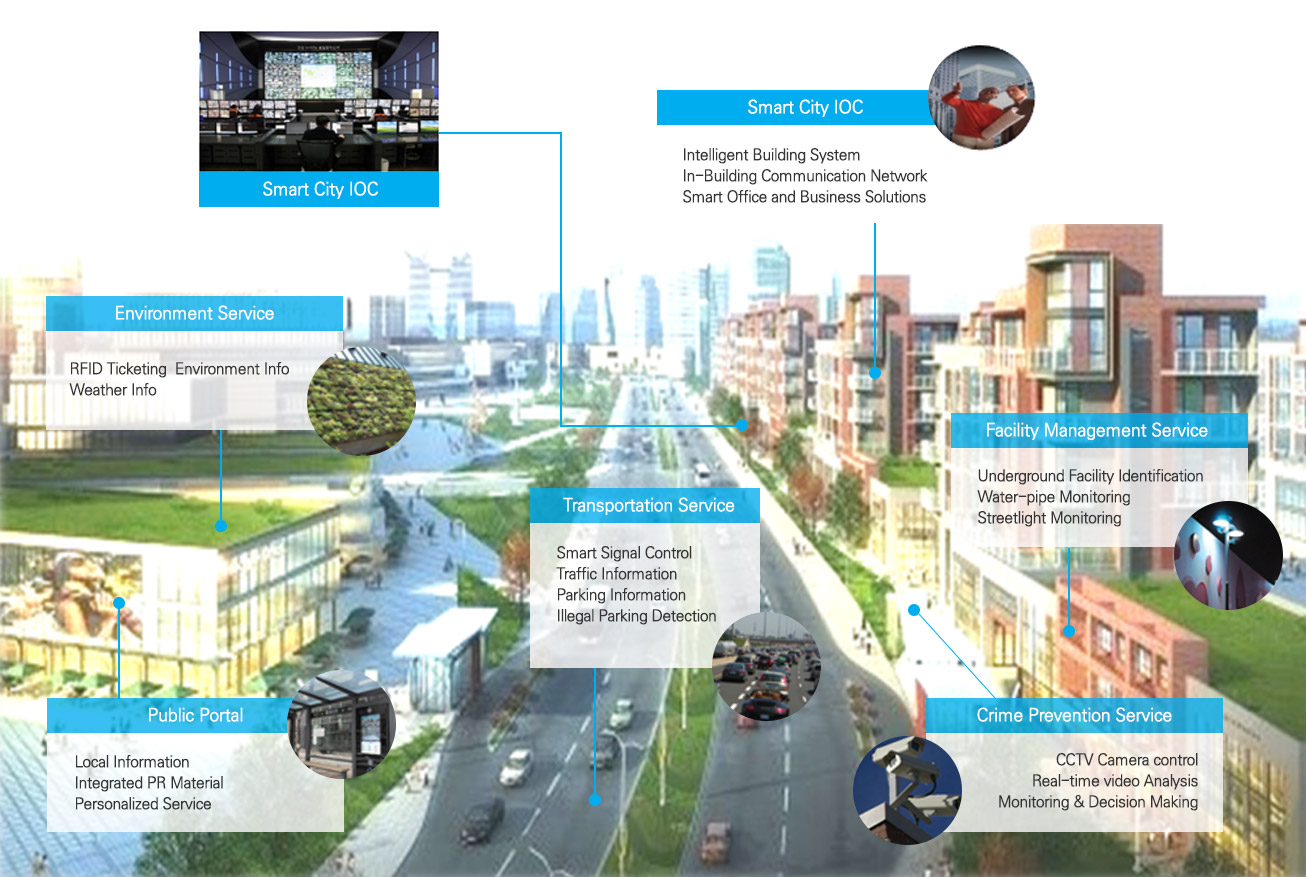 One of the most obvious areas of IoT is to bring security to urban areas. This requires police to monitor live feeds from every part of the city. The technology to ensure that relies on AI systems to detect and report incidences of crime or capturing alleged persons, vehicles, or even activity.

As city administrators and tech developer work together to create a balance between privacy and efficacy, many programs have already been developed in many cities. Sensors are inserted in traffic signals to check vehicular speed and impose digital challans on overspeeding or any violation.

New York City has a gunshot detection technology in some parts that automatically alerts the nearby police officers whenever the gunshot is captured.

Smart technology and IoT are amazing that can do a lot without even bothering anyone. They can choreograph traffic signals and organize waste management through sensors inserted in intelligent cans. Even if we look back a decade before, the smartphone was a thing to us and now even newborn is addicted to it.

For the new generations of smart generations, the paper will be a thing of the past when everything will be done digitally. But for this, we need to wait for at least a decade.