The techies are ruling over the world and are now on the verge of lord over anything which is manual. This has started a new hot topic in an education system that either books or tablets will wipe out from the surface.

Well, it seems a bit earlier to jump to any conclusion at the current stage. As the governing bodies are still forced to use a bookish system while the current trends of developed nations show a different story.

In 2013, Los Angeles Unified School District opened a door for iPads for about 640,000 students as a part of their multi-year commitment with Apple. For further information click this link.

Similar happened in Pakistan in 2012 where a political party gave Laptops to university students in various parts of the country. This brought a new image in the learning methodology of students.

But these two burning questions are, whether tearing up the textbooks by the roots will prove to be a whole new change in the education system? Or, whether tablets replace textbooks becoming the core of the kid’s learning system?

“Citing ongoing studies led by Norwegian researchers, but involving academics in 30 countries, Dr. Marcus- Quinn said it is vital that teachers are allowed to decide which blend of learning is most suited to their own students in their class.”

Being always the top contestants, “textbooks or tablets” is the title of a new war happening in the education system. We can see expanding number of schools shifting towards digital means a long ago.

The demand of today’s technology has set a new set of rules which requires proficiency in digital software which surely cannot be achieved by books only.

There are many practical works that require tablets and computers as the starting point. Hence, the basic knowledge of this software is given in schools through these digital means. 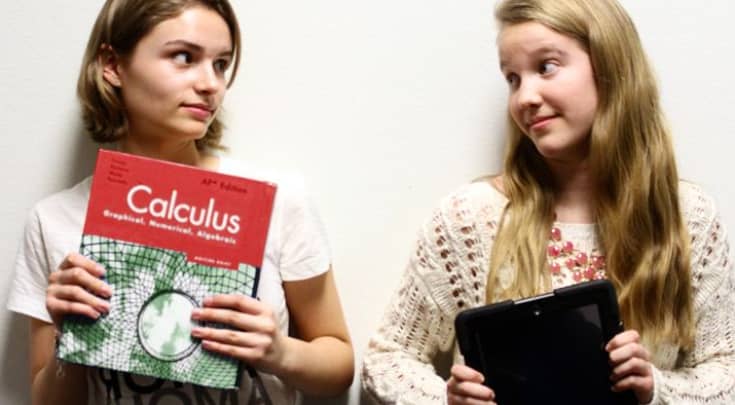 Every high grad student loves to type rather than write. If we compare the writing and typing speeds, we can clearly distinguish the speed of typing over writing. With the expansion of smartphones, tablets, digital watches, and everything digital, people love to tap more.

Tapping and internet surfing captivate the user for hours even without making them dull or tiresome. This is why it is considered to offer digital notebooks rather than manual textbooks.

A survey was conducted at different universities to know about the satisfaction level of students appearing in written and typing examinations. The majority of students did great while typing as removing and editing was easier.

Bundle of Textbooks Vs 1 Tablet 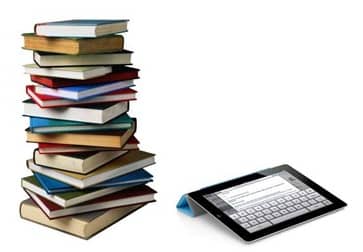 I used to remember those days when my mum used to ready a bulky bag which a bundle of books heavier than my own weight. It felt like Thor’s hammer has been hanging on my feather-like shoulders.

Nowadays, the situation is little the same as the new generation shoulders are still like feathers but the size and weight of the bag become heavier than ever. It seems quite ruthless but this is the demand of some education systems.

Instead of multiple notebooks, just a tablet takes place of everything. Children not only love to study on them but to handle all works with no hassle.

Likewise, a separate case for books keeping requires a large space which can be summarized into a small pack of tablets on your bedside table.

It is observed that students mug up while studying through textbooks before the examination. While researchers said that:

Even schools that are shifting towards digital means have already started giving training sessions to their faculty for their better understanding. Lecture preparation and sorting out notes is just a piece of cake with tablets.

How Your Children Will Learn in Future Classrooms?

Our teachers used to give us lectures and said to write every single piece of information we get through the lectures. This was a trick to memorize the cream words from the whole lecture.

In the same way, scientists of the University of California and Princeton University said that typing on tablets or computers is less effective in memorizing keynotes. Anything once written by hand leaves an impression on your mind which is good for long-term memory of conceptual work.

According to the NEA Policy Statement on Digital Learning:

As different digital tools are created and used, the impact of technology on traditional socialization roles must be considered. The face-to-face relationship between students and educators is critical to increasing student learning, and students’ interactions with each other are an important part of their socialization into society.

According to the National Education Association’s Digital Policy Statement:

“An optimal learning environment should neither be totally online, lacking the educator and peer interaction, nor it should be totally technological free.”

The answer to the burning question either textbooks or tablets are good, solely lies in a balanced environment. The war is not in between them, but in providing modern means to educate students besides entertaining them.

Such an education system proves a whole pack of learning and fun for a student.

The tech gurus need to realize the delicacy of today’s mindset and work on better ways to provide gadgets full of knowledge and fun. But one thing to acknowledge is that tablets for learning are the new face of textbooks; in a much systematic and modernized way.

How AI helps in stimulating life